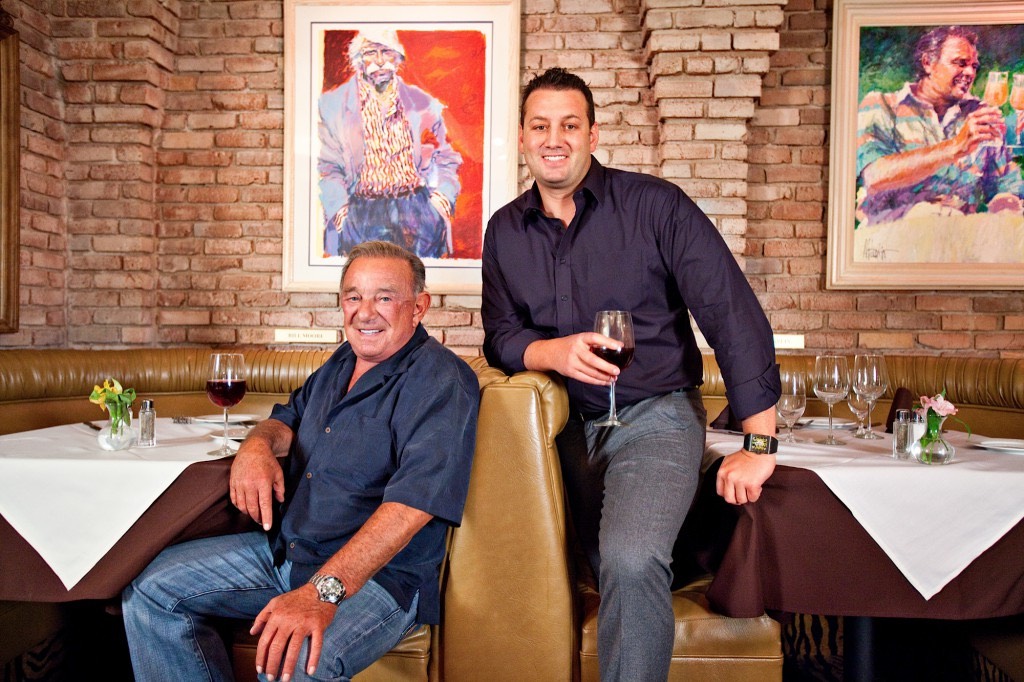 There is Las Vegas royalty and then there is Freddie Glusman

Freddie Glusman is the owner and impresario of Piero’s Italian Cuisine, which has been the place to be and be seen in the heart of Las Vegas since 1982. Glusman, legendary UNLV basketball coach Jerry Tarkanian and hundreds of other celebrities put Piero’s on the map as did the 10-out-of-10 cool factor and mouthwatering fare.

Spending an hour with Glusman recently in an A Room booth is probably similar to spending time with a king, his court and disciples.

“Everybody really does like me,” Glusman says without ego, a shoulder shrug and in his distinctive gravelly voice.

He then says with a laugh and displaying his tell-it-like-it-is approach: “If they don’t like me, they don’t come to Piero’s …”

Those who don’t come are missing out and missing the point, but thousands do come to experience Piero’s and they have been doing so for decades. During the evening, a continual stream of friends, patrons and well-wishers stopped by the booth to say hello. Glusman obliged many, sharing a comment and sometimes an “insult” because that’s part of what makes the Piero’s experience special, unique and memorable.

Glusman may not be internationally known like a Tarkanian or a Frank Sinatra or a Robert DiNiro or a Sharon Stone or a Justin Timberlake or a Mike Tyson (all frequenters of Piero’s over the years), but Freddie is Freddie, Freddie is Piero‘s and Piero’s is Freddie.

And in many, many ways, Freddie is Las Vegas.

Plenty of other adjectives can be used to describe both Glusman and the City that Glitters, where Freddie has made his home for six decades.

“He has a ‘vulgar charm’,” says Kenny Epstein, a longtime friend and owner of a separate Vegas legend, the El Cortez Hotel & Casino located in Downtown Las Vegas. “He’s the Toots Shor of Las Vegas. You haven’t truly been to Piero’s until you’ve been insulted by him.”

Bernhard “Toots” Shor operated Toots Shor’s Restaurant in New York from 1940 – 1971, and his ultra-popular place was frequented by the likes of Jackie Gleason, Joe Dimaggio, Frank Sinatra, Marilyn Monroe, Orson Welles, Ernest Hemingway and many others. Like Glusman, Shor had a way of “speaking it like it was” to his guests and they ate it up, literally and figuratively.

“Being gruff is my cover,” Glusman says, but his friends and others who spend time with him seem to see through the rough exterior, given the impact he has had on so many.

The list of celebrities who frequent Piero’s is just as impressive as Toots’ was. On a recent Friday evening, the Los Angeles Lakers G-League team dined in a private back room while former NBA player Jimmie Jackson enjoyed a meal in the A Room. Taking in a Pia Zadora performance (during her regular Friday appearance; she also plays Saturdays) was Grammy Award-winner Al B. Sure.

“There’s nothing like Piero’s and I think he is one of the kindest men I’ve ever met,” says Jody Ghanem, a former New York City Rockette and widow of the late Dr. Elias Ghanem, Vegas’ doctor to the stars and also the longtime chairman of the Nevada Athletic Commission. “The history of Las Vegas walks into Piero’s on a nightly basis. It is a true Vegas original, just like Freddie.”

Witnessing the Piero’s scene since day one has been Freddie’s son, Evan, who is now Piero’s operating partner, guardian of the tradition and cultivator of the future. Evan, also a guest favorite, has his own unique personality and way of doing things, plus a deep appreciation about what Piero’s is.

“Growing up, it seemed like there wasn’t anybody that my dad didn’t know and nobody who didn’t know him, and that was pretty cool to watch. People just gravitate towards my dad,” Evan says about the charismatic Freddie. “Piero’s is iconic and one of the oldest restaurants in Las Vegas, and we are still going strong.

“What sets us apart is both my Dad and I love everything about Piero’s. By having one or both owners here almost every single night, you can’t help but feel a family vibe. Our passion is shared by the staff, from the hosts to the bartenders to the bussers to the waiters to the chef and his team. They all have a passion because my dad and I have a passion. He is still sharing his expertise with me on a nightly basis, but I am the next generation and together we are ensuring the iconic factor of Piero’s continues.”

Well, this is the first blog in a new series chronicling Piero’s past, present and future, and we didn’t yet write much about the delicious Italian offerings. Continually dazzling guests are the slow-simmered Osso Bucco (the featured house delicacy), other main menu items and a few secret ones from “Freddie’s menu”.

More on this in future posts, so be sure to follow the Las Vegas Golf Insider website and social media in addition to the online presence of Piero’s, which recently earned an Award of Excellence from the Distinguished Restaurants of North America.

And why is a golf website writing about Piero’s? The Glusmans have been longtime members of The Las Vegas Country Club, yet another legendary spot in the history of Las Vegas, plus most golfers enjoy a terrific meal, good wine and a dirty martini every-once-in-a-while so put Piero’s on your list to experience if you haven’t already or visit more often in 2019 if you already enjoy it. Plus, PGA Tour, PGA Tour Champions and LPGA Tour players love Piero’s.

A great way to end this post is with a quote from Travel Weekly writer JoAnna Haugen:

“The restaurant tends to be a destination for celebrities, politicians, athletes, philanthropists and locals who have grown to love the food, service and environment. Piero’s is intimate and unpretentious, with dimmed lights, a dark wood bar and a seasoned staff. It doesn’t try to compete with restaurants on the Strip, nor does it have to.”

Feel free to add “intimate and unpretentious” to the descriptors of Freddie Glusman. No doubt, he’ll be more than happy to disagree with you and, no doubt, you’ll embrace that experience when he does.

For more and/or reservations, visit PierosCuisine.com. Evan and his team will give you 10% off on your next visit when you mention Las Vegas Golf Insider or this post. Management reserves all rights.